“All that could be seen of the knife was the bone handle, where the gallant motto, the simple word: LOVE, was engraved in black letters.
In the suburbs of Lille, one evening after Christmas, a ritual is being prepared.
His goal: to track down a century-old ghost who holds the keys to a long-buried family mythology.
To bring the spectre out of the rocky beyond in which it slumbers, a game of gin rummy is organised. But who will win, Huguette, Sybil and self-proclaimed matriarch, or Domitille, a bimbo with thousands of followers?
Germinal Georges is a ghost hunt that takes us along the cobbled roads of the Nord-Pas-De-Calais region, tracing the paths of four generations. A mixture of mining roots and scratch cards, from the communist struggle for workers' rights to Judith Butler’s “gender trouble.” The film engages with the fissures Dustan evokes, like Leslie Feinbeirg’s Stone Butch Blues, using a common historical tool of these resistances: political subversion as a tool of emancipation.
This fresco explores the actors of a nuclear family, within generations that no longer have the same codes or the same expectations, so how, in this gap of nearly 100 years, can we recover a genealogical memory that has been silenced? 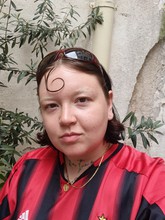 Born with the Y2K bug and reality TV in Lille in 1997, lives and works in Paris. After a first solo exhibition in 2019, "Sunny Day @ The Pool", she co-founded the same year the collective @supersaphique, before setting up her studio in the Pointcarré cooperative in Saint Denis.