EN ATTENTE DE TRADUCTION !!! L’éléphant s'évapore is an absurd film mixing symbols and metaphors, embodying a relationship between cinema and theatre, so to make a work exist as if in a game.

The director creates a parallel, a causal relationship between the young man Chang (elephant in Thai) and an inflatable 3D elephant: when Elephant dances, the 3D elephant inflates; when he stops dancing, the elephant deflates.
All the parallel worlds unite, becoming one dimension. The inflatable elephant reappears on a film set: the electricity is cut off, the film set and the crew disappear: the real world disappears, leaving the place to the 3D elephant, free of any support, and to the voice-over which takes control, like in a game. 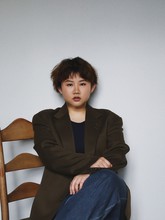 Chuxun Ran was born in Kunming in 1993. She graduated from the Beaux-arts Nantes-Saint-Nazaire in 2020. She mainly works with moving images (videos and video-installations), and combines the notions of reality and fiction. Her work goes beyond the question of documentary, docu-drama and fiction and addresses both social and intimate issues.