John et la République, Mémoires d’un perroquet is a whimsical adaptation of a true story from 1794 about a parrot accused of royalism during the Terror because it repeated “Long live the King! Long live the nobles! Long live our priests!”

Conceived as a philosophical tale, the film follows the crazy adventures of a parrot caught up in the turmoil of history, a privileged witness to human stupidity and cruelty, a hero in spite of itself in a world that is not its own and which it does not understand. By turns a voyeur and an actor of events, John makes his way through a world in upheaval, between royalist libertines and tyrannical democrats.

It is the story of a beast and human stupidity (bêtise). A stupidity of which everyone is a prisoner, just as the animal is deprived of humanity. A stupidity that rigidifies ideas and fossilizes us. “Stupidity,” as Flaubert said, “is something unshakeable; nothing attacks it without breaking itself against it. It is of the nature of granite, hard and resistant.” It is this stubbornness of spirit that can be seen on numb faces and that makes the fool advance with a sure and satisfied step. But it would be wrong to believe that stupidity returns us to a bestial state. Man’s bestiality is not similar to the animals. It is far more dangerous, for it is the source of injustice and cruelty. 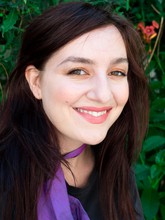 Charlotte Pouyaud is a French artist and filmmaker born in 1995. She graduated from l’École des Beaux-Arts in Bordeaux as well as obtaining a master’s degree in Philosophy. She makes fiction films in which she stages miscellaneous news, historical events and topical situations, using the potential of drama in order to unfold them, most often in a tragicomic register.