Objets-mondes is interested in the traces that humans leave on the environment as well as the way they become an intrinsic part of our ecosystem. Abandoned objects, such as cars or computer screens, were captured with the help of photogrammetry in order to create a video collage composed of extracts from reality. Re-contextualized in disproportionately large dimensions within landscapes seen from afar, these abandoned objets stand out like ruins of monumental architecture. The absence of life as well as the luminous atmosphere of the work create a tension between apocalyptic feeling and nostalgia, between precious object and waste, between idealized nature and the indelible presence of human traces.

These vestiges of the Anthropocene are deployed within an interactive device in collaboration with Guillaume Arseneault, and a soundtrack composed by Roger Tellier-Craig. Two prints complete the installation. 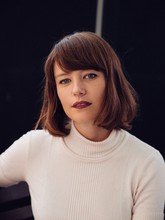 Sabrina Ratté, born in Quebec, 1982, lives and works in Montreal. Her practice focuses on the multiple manifestations of the digital image. Her work is situated halfway between landscape and architecture, on the thin line that separates the real from the virtual. She was nominated for the Sobey Prize in 2019 and 2020. Her work Floralia is now part of the collection of the Montreal Contemporary Art Museum. In the spring of 2022, the Gaîté Lyrique presents her first major solo exhibition.