Am I too viscous ?

The Navier-Stokes equation above is a fundamental model stating that the velocity field (fluid motion), is the result of the equilibrium between three actions:

(-1)/ρ ∇P is the gradient of pressure: the perceived difference between where the fluid is, and the array of possibilities. Fluid motion tends towards a place of lower pressure, if this place exists. is the fluid language: pressure waves propagate from one particle to the next. Compression omens an upstream obstacle, and expansion informs that a crisis has passed.

+ ν∇² u is the body's viscosity, its resistance to change. Viscous bodies move with effort as their elements try to keep cohesion. Non-viscous bodies are incoherent and overly-excited with any energy input.

+ f is an external force, like gravity, which acts evenly on every fluid body but with different results, depending on their nature.

Like every other body of water, I too change with shear. I too wish to move towards lower pressure, more comfortable situations. Adverse gradients can decelerate me, detach me from my path, triggering instabilities and turbulence. I react differently to external forces that apply evenly on my peers: it doesn't take much for us to be influenced into opposite paths. My viscosity does keep my internal cohesion, but stops me from necessary change. 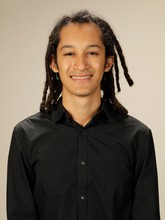 Costa Rican, laureate of an AEFE Excellence-Major scholarship, Rolando Cruz Marquez is a PhD student in aerodynamics at ONERA Lille. His scientific research focuses on dynamics and control of aircraft-generated wake vortices. In his artistic work fluid mechanics are a tool to study the interaction between our sensibility and the external world.