Shinigami is a sensory investigation into the stomach of an assassin. What's in a monster's stomach?
The corpse of Demeo, a septuagenarian hitman, is found in the aquatic darkness. A frog enters his mouth and accompanies him in a delirious autopsy. As a bridge between life and death, a disillusioned and morally ambiguous investigator, the frog navigates its way through Demeo's ambiguities and takes us through the sometimes dark and sometimes vulnerable territories of human nature, between the real and subconscious times of memory.
The film is a labyrinth between scientific method, philosophical tale and iconography of murder and mystery. It carves a narrative arc in swirling furrows with imagery that is both conventional and abstract. Shinigami proposes an interpretation of death as a digestion in the underworld, flowing between genres. 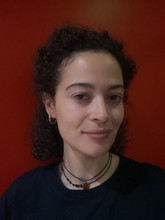 Born in Casablanca, Morocco (1991), lives and works in France. Lina Laraki is a Central Saint Martins graduate (2014). Her practice is situated between visual arts and cinema. She directed her first experimental sci-fi film (The Last Observer) in 2020, premiered at Sheffield DocFest, and her first fiction short (Halves Through Night) in 2021, premiered at Hallucinations Collectives. Her work addresses various themes often dealt with in their shadows, whether it is the mysticism of reality, human deviances or vulnerabilities. She works on the sensorial and experiential aspect of cinema to dig into the ambiguities and ambivalences of reality.