When I was in kindergarten, compulsory naps scared me. Those dormitories full of dark blue plastic mini-bunk beds really didn’t make me want to sleep. So, finally, when everyone else was fast asleep, my eyes were wide open and the sound of my classmates’ breathing made me anxious. Paradoxically, these micro insomnias made me feel like I was missing out on life. I was missing out on a collective experience, I imagined them all, one next to the other, on the sleep train, a train that I could see pulling away but could not chase after.
One afternoon a man came to give a traumatic talk about this. He called it “The Sleep Train.” It arrives in a yawn, and if you don’t go to bed at that initial warning you miss your train.
Missing the train. An old artist once told me at a crappy art show, “Never miss the train, there are career opportunities that only come around once.”
Ta carrière, he said. I’ve always found that word strange. Isn’t a carrière a quarry, an empty plain filled with big hills of stones?
Some time ago I was surprised by the film Wanda, made in 1970 by Barbara Loden. It’s a film in which we see a mother abandoning her children. She wanders around strange places, on hills, in quarries full of coal, her curlers coming unstuck and with her lipstick smudged and dust on her apron.
Ghosts are people who wander between representations and have no place to go; they haunt the city.
Vitry-sur-Seine is a haunted town. Some people who live there drag their bodies from one place to another looking for a new body to possess.
We are all looking for a comfortable body that would feel at home anywhere.
This film is about passive resistance, about an aborted dream. 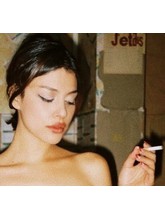 Anaïs-Tohé Commaret was born in Vitry-sur-Seine, a suburb of Paris. She explores the sensory potential of the film medium and her work is defined by a back and forth between fiction and documentary. She put this to good use during her studies at the Beaux-arts de Paris in the studio of Clément Cogitore. She then entered Le Fresnoy - Studio National d’Arts Contemporains, where she learned from Ben Russell. She also met Nicolas Jardin, a young lighting cameraman, and together they created striking images that won them the grand prize for video arts at the Coté-Court festival in 2020. Anais-Tohé Commaret won the jury’s “Coup de Coeur” prize awarded by Mac Val, the Palais de Tokyo and Lafayette Anticipation at the Montrouge Salon d’Arts Contemporain in June 2022. Her vaporous and phantasmagorical universe stems from her fascination with characters she defines as anti-heroes/ghosts. These are beings who wander between the intervals, looking for a place where they can feel at ease. She also works as an erotic dancer in a Parisian cabaret. From this experience has arisen a new form of questioning in her approach to the capitalist system, to work and to the self-sufficiency of TDS.