In Phalène territory and time are both uncertain. We can at the most speak of a pre-modern character since nature still seems to be the main interlocutor here. The two heroines are busy with daily tasks whose regularity describes an existence regulated by the most trivial rites: sleeping, eating, washing – in other words, activities that place the narrative within the sphere of domesticity. Actions replace words, and the absence of dialogue increases the precision of the gestures. Such household choreography is all the more visible because the two characters are like each other’s doubles. Their physical resemblance unfolds in their strange mirror-like movements. Thus, daily life is imbued with a mystery that the film will continue to intensify, through the sudden discrepancy between these two synchronised bodies.

This is therefore all about fever and water, cave and skin, mist and spells, all of these motifs gliding along as if in a dream, like a boat blurring the surface of a lake, before an organ of stones, without the two protagonists having to make a single paddle stroke. Sarah-Anaïs Desbenoit allows a somewhat magical dialectic to emerge, between the becoming-statue of the twin sisters and their inscription in a liquid world. The phantomatic dimension that runs through her film is the expression of a dialogue between the elements, as if these could only emerge in the form of a disturbance, in the face of the ordering of these over-regulated lives. The result is a rift between body and mind; reality cracks, and the psyche opens up to a wandering mood. Desbenoit’s paintings are tempted by myth, and with it, by an almost primal narrative that seeks to invent figures which ultimately never live up to themselves. 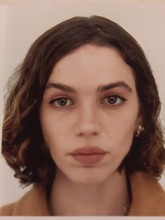 Born in Paris, Sarah-Anaïs Desbenoit graduated from the Beaux-Arts in Cergy in 2020. During these years, the experience of a residency at the Oasis de Thigmert in the Moroccan desert and an internship at the Villa Kujoyama in Japan proved decisive for her future research. She began developing liminal spaces conceived as places of contemplation conducive to meditation and deceleration. Her practice has developed around the question of illusion, the desire to sublimate, to create differing strata of reality. Fascinated by the absorbing power of images, she is constantly seeking to make use of their poetic and hypnotic faculties while experimenting with mechanisms of appearance and disappearance in visual and aural installations. Over time, her research has taken on an important immersive dimension, using the exhibition medium to inhabit spaces and articulate narrative. For her, the exhibition is a work in its own right. By means of video and the recurrent use of projection, sound and sculpture she builds up a complex network of interactions between these various elements.