In The Writing of Stones, Roger Caillois suggests that to split a stone and make its heart visible is to access a primitive image of the cosmos and reveal a parallel universe*.

In order to perceive cosmic dimensions that are invisible to the naked eye, we dig up the earth to extract a dust that is essential for digital photography: silicon. This semiconductor, used massively to manufacture instruments for observatories and space telescopes, is thought to come directly from stellar explosions, the supernovae**.

A cycle is therefore formed between the particles we collect on Earth and the stars we want to see: we have to dig up the soil to find grains of stars that allow us to image suns.

The transformation of the universe itself into a mining resource is bringing about a change in the state of cosmic stones. They are gradually losing their aura as quasi-imaginary objects and becoming industrial commodities in the same way as earthly stones.

Nadir, Picture Elements Explorer, is an instrument, a quasi-camera, a kind of space probe. A composite rock is exploited to form images. The machine then tries to reveal the paradoxes that structure astronomical imagery; between the celestial surrealities and the mineral materialities of the representations of space; between inevitable excessive extraction and a poetry of the elements that traces a path linking the earth's core and the cosmic microwave background. 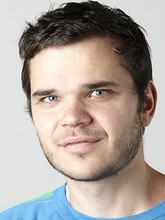 Born in 1995, Lucien Bitaux is the creator of Scoposcopy, a discipline that seeks to represent dimensions beyond our perception. His approach is based on making his own instruments. Since 2020, he is working on a thesis in artistic creation co-surpervised by Nathalie Delbard and Melik Ohanian placing astronomical visualizations and contemporary photographic experiments in a common iconographic field: exploratory imagery. At exhibitions and conferences, he discusses these subjects many artists and scientists such as Joan Fontcuberta and astrophysicist Jean-Philippe Uzan.