ORGAN is inhabited by a colony of Tineola bisselliella, a species of moth belonging to the Tineidae family. The metamorphosis cycle of lepidopterans (the order including butterflies and moths) is a phenomenon that engenders three successive life forms and has given them the greatest known resistance in the living world. In the wild, these moths are essential for the decomposition of keratin, an organic protein found in animals and humans. The colony is housed in a sheet of felted animal wool, a component of certain human musical instruments, where it is likely to live for several hundred years. The mating calls emitted by the colony's members, extremely high-frequency vibration waves far beyond those discernible by the human ear. were captured by an ultrasensitive recording device in a specially soundproofed chamber. 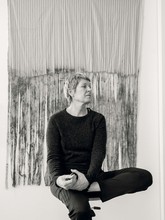