A faceless creature manipulates a strange machine equipped with multiple screens and slots for floppy disks. Those contain music videos, all of which depict sexual fantasies. The creature plays with the disks as if it were composing a live mixtape.

The Fresnoy - Studio national project will be the first part of a 50' film called Memory Slot. 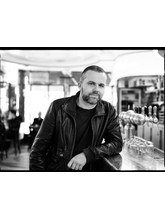 Yann Gonzalez is a French filmmaker born in 1977 and living in Paris. He has directed numerous short films and music videos, as well as two feature films: Les Rencontres d'après minuit (2013) and Un couteau dans le Cœur (2018), selected for the Cannes Film Festival.

Alain Garcia Vergara is a Mexican visual artist born in 1989 in Mexico City and living in Paris. After studying at the Beaux-Arts in Cergy, he exhibited his work in galleries in France and Mexico. His short film Paradise Loop (2017) has been selected in numerous international festivals.

Together with Pierre-Edouard Dumora, Alain and Yann created the "I've seen the future" multimedia evenings in 2014. Between then and 2017 these events hosted large numbers of artists, including Elysia Crampton, Inga Copeland, Yves Tumor and Alessandro Cortini.