“The camera seemed made to copy reality; it started to fashion dreams. The screen seemed destined to hold up a mirror to the human being; it offered the 20th century its demigods, the stars.”
Les stars, preface to the third edition, Edgar Morin.

Ad Astra proposes to generate before the traveller’s eye the “astral print” of Anna Cleveland, a Modigliani-esque supermodel, showgirl and daughter of the stars. We have fingerprints, so could we imagine having our own starprint?

Ad Astra starts with a face and then invites us to project ourselves into the cosmos, taking us on an odyssey into space through the stars/faces of the solar system. Before our eyes, thirty years of planetary movements condense freely and reveal the astral imprint of this human exploration, embodied by Anna Cleveland. From humanity to stardust, ad infinitum. 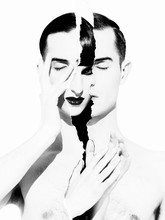 As a child, Guillaume THOMAS wanted to be a magician. They told him "magic does not exist," so he armed himself with a still and move camera to prove the vitality of fairies. His research took him on the trail of those entities which he describes as "characters," those freedom-loving beings that express themselves in their multiplicity, their infinite self-recomposition. Trained in photography and video at the École Nationale Supérieure des Arts décoratifs in Paris, as well as at the School of Visual Arts in New York, Thomas made his first film, Life Damages the Living, at Le Fresnoy - Studio national in 2021. With the visual and sound installation Ad Astra, he turns to the stars: how to go from fingerprint to starprint?
His second documentary Pinned into a dress, codirected with Gianluca Matarrese, opens the 37th Venice International Film Critics' Week 2022.