A world without adults. Groups of kids live unfettered by the tyranny of adulthood. A girl and a boy crash a car. They wander the landscape, stop at a farm, help their friend. They return to their community living in a group of cliffside caves next to the sea on an island. They muck about, play games, swim, cook rabbit over a fire, and perform plays for one another. In a vast abandoned quarry a filmmaker shows a film about a young minotaur confused in a labyrinth. The girl leaves on a pilgrimage, going through an underworld populated by decrepit adults barely seen. She emerges into another land, climbs a mountain and meets a scholar and their translator. She asks the scholar about the Earth, the times, language, the future (this is a play by Don Delillo called The Word for Snow). Only partially satisfied by mysterious answers, the girl leaves to find her own way in the world. She hot wires a car and drives along a desert highway listening to her favourite song, shutting her eyes, singing along and laughing. 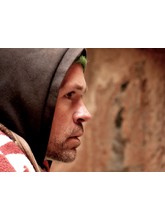